I have updated BBCSDL, the cross-platform version of BBC BASIC for Windows, Linux, Mac-OS X, Raspberry Pi and Android. Full details of the new release may be found at the forum. Notable enhancements in this version are cross-platform support for network access, and that the Raspberry Pi edition now runs Andy Parkes' BBCEdit IDE as well as my SDLIDE. The Raspberry Pi edition now has substantially the same capabilities as the other desktop editions, including debugging and profiling.

Sounds good! BBC Basic is a good fit for the Pi, I think.
Top

BigEd wrote:Sounds good! BBC Basic is a good fit for the Pi, I think.

Yes, but Raspbian Stretch has a serious problem with its software OpenGL drivers (it runs much more slowly than the previous Raspbian Jessie) which is a great shame. BBCSDL is usable only if the 'experimental' (VC4) GL Driver is enabled, but that isn't always possible (for example it's incompatible with the camera module and also with Kodi). 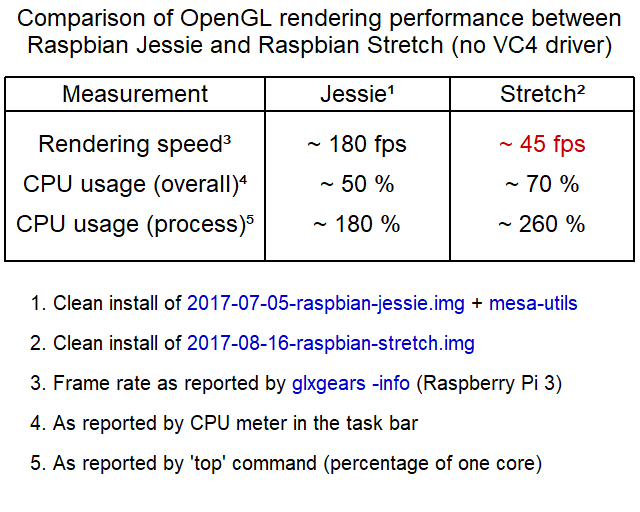 ouch! That's a serious performance regression, on the face of it.
Top

BigEd wrote:ouch! That's a serious performance regression, on the face of it.

Indeed. Unfortunately nobody will accept responsibility for it: the Raspberry Pi people say it has arisen 'upstream' in Debian and therefore there is nothing they can do, but other Debian Stretch distributions don't seem to have suffered the same regression. My guess is that there's a configuration issue affecting only the armhf build, perhaps a change in compiler switches or a change in the compiler itself, causing inefficient code to be generated. It could be as simple as having accidentally disabled NEON (SIMD) instructions.

Anyway, there doesn't seem to be much prospect of it being fixed any time soon. Not many Raspberry Pi apps rely on OpenGL, so the motivation for doing so isn't that great. However BBC BASIC does (to be more precise, the version of SDL2 available from the RPi repository does); it works well with the GL Driver enabled, because that replaces the broken mesa drivers, but not otherwise.

Tried installing this on my Pi but the installer reports that all files to do with libsdl2- are not found.

Is this just me or is it a known problem?
- John

flaxcottage wrote:Tried installing this on my Pi but the installer reports that all files to do with libsdl2- are not found. Is this just me or is it a known problem?

Nobody else has reported it. What model of RPi and what version of Raspbian are you running? Here I run it on an RPi 3 with Raspbian Stretch, and (so long as the VC4 GL Driver is enabled) it works pretty well considering the low-powered CPU. It should also run successfully with a late version of Raspbian Jessie, but anything earlier than the RPi 3 is really too slow to be usable (and SDL2 is rather out of date in Jessie's repo).

What messages are you getting from apt-get, exactly? I can't think of any reason why the libsdl2 packages would have been deleted from the repository, and I certainly hope they haven't!

Thanks for the quick response, Richard.

I am trying this with a Pi2 running Raspbian Wheezy

And this is the error message I get:

My Pi 3, running Raspbian Jessie is OK with version 0.16e. Is it the Wheezy version that is causing the problems?
- John

I've done some more work on this with my Pi 3. I used a new, clean Raspbian Stretch image as Richard suggested.

I used the install-rpi.txt file included with the bbc-rpi.zip file but, because I am a bit of a muppet with Linux, I found it difficult to follow exactly and had to do a lot of research and trial and error experimentation before I got it to work.

If it helps I have added to the instructions so that installation is easier for non-experts.

Anyway this is brilliant!

It is much better than 'other BASICs' on the Raspberry Pi under Linux. It looks like I shall have to have a go at 'bare metal' programming of the GPIO pins using the built-in assembler. This should be fun.

flaxcottage wrote:It looks like I shall have to have a go at 'bare metal' programming of the GPIO pins using the built-in assembler.

You can if you want to, but it's not necessary (unless you want to do something for which BASIC is not fast enough). BBC BASIC for SDL 2.0 comes with the 'gpiolib.bbc' library, which allows you to access the RPi's GPIO pins from BASIC, without needing assembler or any other 'tricky' code. It is documented within the code of the library itself, but it's very straightforward.

You mention in one of your posts a very old version of BBCSDL. Because this is a product under active development, please make sure that you keep it updated to take advantage of new features as they are added, and bug fixes. The current version is 0.19b which incorporates a change that was necessary in order to run the Forces of Darkness and Xmas Demo II programs (and also a fix to the assembler). Of course you don't need to repeat the original installation process, unzipping the latest release is all that is necessary.

I have used the Windows version for a long time now. It was great for teaching and much better than Python, which seems de rigeur in schools these days. Why the language has not been accepted by the examination boards I cannot understand - I did use it myself for GCSE projects and managed to get it accepted by OCR for one of their qualifications.

Anyway that package had a huge manual, which I read. Perhaps I ought to read the one for this implementation of the language!

flaxcottage wrote:Why the language has not been accepted by the examination boards I cannot understand

It has always been accepted - in fact recommended - by OCR (the Oxford, Cambridge and RSA Examining Board). Although it's no longer a current publication, the 'OCR Computing for GCSE' student's book has an entire chapter in which all the code examples are listed in BBC BASIC! It says on page 211: "The code samples included in the chapter have been written in BBC BASIC because of the similarity of BBC BASIC to pseudocode which therefore makes it easier to translate the logic into other programming languages".

Although the other UK examining boards may not have been as proactive as OCR in recommending BBC BASIC, I am not aware that they have any specific objections to it and I've had no reports to that effect from the many schools who teach BBC BASIC to their students.

For the 2018 examination series WJEC will accept BASIC-derived languages and OCR will accept a generic BASIC language as being suitable for the Non-Examined Assessment (NEA) component of their GCSE Computer Science examinations. This is great.

Any forum members who are currently teaching Computer Science to GCSE level should, therefore, make sure they enter their students for either WJEC or OCR (He says mischievously).

BBC BASIC's CASE statement is based on Pascal's syntax (CASE thing OF) so that makes it a 'Pascal-based language', right?

Richard Russell wrote: BBC BASIC's CASE statement is based on Pascal's syntax (CASE thing OF) so that makes it a 'Pascal-based language', right?

This is really great, thanks, Richard.

Up to now I have been using RISCOS on the Pi for my 'serious' programming and educational software.

Control through the GPIO pins is very easy using the gpio library supplied. I have managed to control a 16x2 OLED display direct from the GPIO pins using it. Configuring a 'User Port' using GPIO pins 20 - 27 inclusive is child's play.

My next step is to get some retro CAL software working. I tried the venerable Granny's Garden and it worked with minor tweaks!

I use this software because it is very well written and is a good indicator of BASIC compatibility with the BBC micro. So now Granny's Garden works on the Pi under Linux.

The MODE7 emulation works well but is slow and is only usable on a Pi 3. Non-MODE7 programs work very quickly indeed and approach RISCOS for speed.
- John

flaxcottage wrote:The MODE7 emulation works well but is slow and is only usable on a Pi 3.

That's true of double-height characters; I don't think single-height MODE 7 is particularly slow. The reason double-height is slow is that the characters are 'stretched' at run time, rather than being pre-rendered that size.

Hello there.
I've managed to install BBC Basic on RPI. The only thing is I can't see a file menu.........just a basic window with 'Choose IDE' at the top of it and 'File or path not found' in the window.
How do I get a file menu installed please?
Thank you.
Top

pixelblip wrote:a basic window with 'Choose IDE' at the top of it and 'File or path not found' in the window.

I would guess from that symptom that when you extracted the BBC BASIC zip file it didn't create the correct directory hierarchy; perhaps you accidentally told 'unzip' to use the 'do not make directories' option.

The simplest solution is probably to unzip 'bbc-rpi.zip' again. It should create two subdirectories below your BBC BASIC installation directory: lib and examples; check that they exist and are populated with files.

If that's not the problem I'm not sure what the cause might be. The only files that the 'Choose IDE' window tries to load are lib/dlglib.bbc and lib/FreeSans.ttf.

Oh sorry. Schoolboy error. Did not have the 'lib' folder inside my BBC Basic folder. Doh!
Thank you for such a quick response.
I am trying to program LEDs in BBC Basic.......fun stuff.
Top

You need the supplied 'gpiolib.bbc' library for that. The library itself should contain sufficient instructions to get you started.

I've updated BBC BASIC for SDL 2.0 (all editions) to version 0.21a. The main changes are support for the SYS statement to return a floating-point value, and inclusion of 'control code symbols' in the MODE 7 character set. It's available now for free download.

Return to “software & utilities for the pc, mac or unix”