Good afternoon all. First post on here so be gentle

I came across this forum after googling the uk101.
We've recently been clearing my parent's house and came across a Compukit UK101 in its original box found in an old metal cabinet in the workshop. All keys are there and from first glance looks to be all there. There's also a magazine advertising it with photos of the unit before it was launched.

Seeing as these are pretty rare now we're wondering what it would be worth and if there is still a market for them.

I've attached some photos below:

The photo was in the box with the unit. Not sure if it is anything to do with throwing Compukit or not.
Top

Hello and welcome to the forum.
Yes these do have a following, its not often they turn up with the original box, its does has a Monitor Rom upgrade, if you are thinking of selling it it will be an easy sell, the magazine alone are sort after, prices do very I've seen these go from £250 and upto £450 depending on any add-ons with the computer.

Hope you hang around after you've offloaded your UK101. Oh! And good luck with that

And offering goodies too. From the photos this looks to be an early version - the mains TX is the 'lethal' one.

It has 4K of RAM and looks to be totally unmodified. These are sought after. If it works you should get North of £350 for it.
- John

Before we think about listing it for sale on the Web is there anything I can help with in terms of photos or diagrams for anyone?
Top

I also have a stack (yes, a stack) of BBC microcomputers and a couple of Acorn models. He got into building them up and programming again before he passed away.
Top

Looking again at the pictures somewhere along the line it has lost some memory, these came standard with 4K of Ram with the ability to upgrade to 8K of Ram but this one has only 3K, but this is an easy fix and it has got a spare arrow up key.

If the machine had a few add-ons or upgrades then there would be a lot of interest in them with requests for pictures and info, but thanks anyway for asking about any extra pictures wanted before you sell it.

Nice honest machine, should be no problem to sell as it is, I wouldn’t recommend including the mug shots though.
Pete
Top

Here is a later Advert for UK101 Hardware and Firmware. It is from 'Computing Today' April 1982.

I have also found a catalogue from Magnum Electronics that I sent off for in the Summer of 1982.
I have not heard of them since and wonder if this was all Vapourware, perhaps someone else on here had dealings with them?

Wow. 01 telephone numbers and Access cards. Even when talking about retrocomputing, that's what really takes me back!
Top

crj wrote:Wow. 01 telephone numbers and Access cards. Even when talking about retrocomputing, that's what really takes me back!

I suppose you remember the animated Access card adverts?

I'm looking for early text adventures... Are there any early examples on UK101 that you know of?

Was Galactic Hitchhiker, mentioned earlier, a "proper" text adventure? [I need to fine & fire up a UK101 emulator to give it a go]

Does anyone have any knowledge of memories of this program, TIKVA? 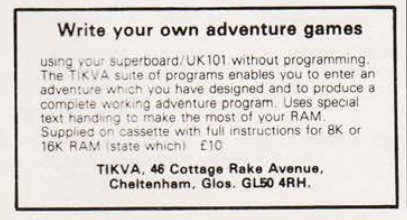 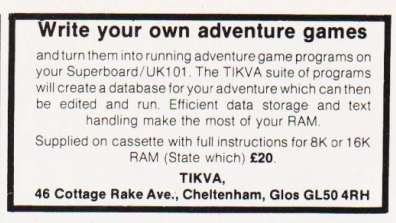 Can anyone please tell me what I need to do with the .hex file mentioned below to load it into the UK101 java emulator?
viewtopic.php?p=61073#p61073

I'm not that familiar with available UK101 software, so from the titles I'm not sure what's already been archived. How are they archived, WAV or just data dumps? Does the original Galactic Hitchhiker still require you manually adjust the terminal width?

Ultimately I'd like to see them all uploaded so that anything of interest can be added to the MAME software lists.
- Nigel

waltermixxx, that looks amazing! Are the schematics and gerbers available anywhere? It probably wouldn't take much work to adapt this to be a UK101.

Sorry for the late reply.

Im curious about the program called DOS, could that be uploaded.

All of them, please.

For the UK101, the best method of archiving the tapes is to convert to WAV files.

The way I did it was to record into my PC from a stereo cassette recorder using 22.xx kbps, though it still works at 44.1kbps. The recording could then be moved from my PC to a blank tape. Using a stereo to mono lead the tape was played back into my UK101 and it worked.

The problem with WAV files is their size. MP3 files do not appear to work though maybe OGG or FLAC files might (for archiving online and then converting back to WAV)..

If you can record one of the programs I can check it out. I am happy to host them for you.

A Beeb port of Galactic Hitchhiker is here:

The attached .zip file contains 2 pieces of UK101 software that I archived many years ago and have not seen on the internet.

They are both written by Premier Publications and have 1982 dates. The files are binary and are captures made via a BBC micro. You can see the NUL characters at the end of each line, and the "OK"/"Ready" prompts at the end.

There is some form of protection here; the VDU is turned off during loading. There is nothing to stop you doing a CTRL+C and then LIST-ing the program though!

Nice one, thanks. But how did the BBC do it? Please tell.

I found this file with it (attached), so I guess I used it to transfer the data. It looks like I took an example from AUG and modified it (badly!)

I also had memories of there being a successor to Galactic Hitchhikers by the same author, and I can now confirm it - see near the back of Computing Today August 1982, where you will see the successor game is called "Mad Monk" and even has graphics. I've never owned it and never seen it (but I'd like to see it!)

I found this file with it (attached), so I guess I used it to transfer the data. It looks like I took an example from AUG and modified it (badly!)

I also had memories of there being a successor to Galactic Hitchhikers by the same author, and I can now confirm it - see near the back of Computing Today August 1982, where you will see the successor game is called "Mad Monk" and even has graphics. I've never owned it and never seen it (but I'd like to see it!)

Here's my collection of UK101 games & other programs:
They are binary dumps read by a bbc micro from tape so should load in
emulators (the suffix .tape was used by one UK101 emulator)

The files are split into three folders:

2. Magazine - programs I typed in from magazine listings:

It's all in BASIC so not great quality but it was the first large program I ever wrote back around 1980/81 I think.

They are mostly loaded from Basic with the exception of Galactic
Hitchhiker which loaded from the Monitor.

A Life and a Pi calculator- right up my street!
Top

This collection actually includes several of the programs in the advert posted by 8bitAG. There's a couple more possible contenders for early adventure games:
Top

It looks like dogems is also by A. Knight as I found a couple of catalogs from him which list that as well. It may have been published in a similar way to "le passe temps", a listing of which was printed in the July 1980 issue of Practical Electronics presumably as a promotion for his software.

The catalogs are dated 22nd November 1981 and 1st August 1982 although the latter was actually from Merlin (Micro Systems) Ltd as he appears to have formed that company sometime between those dates.

Would it be possible to share/link the catalogues?

Adventure 10/Caverns of Doom sounds interesting as well, as we don't have that listed on CASA at the moment.


Also here is the manual for Quest for the golden crown:

Quest For The Golden Crown Manual (Out of order).pdf
(1.83 MiB) Downloaded 27 times


Note the scans labelled "Out of order" were printed double sided on A4 then stapled as an A5 booklet.
I unbound them to scan them in my document scanner so the page order is wrong in the pdf although if you printed them out double sided you could fold and re-staple them in the correct order the same as the original

Indeed, one of the most prolific producers of good quality software for the UK101.

Edit: There might be a little bit of a clash between Knight Softwares on that Dragon wiki...
Sprite Magic, as you rightly point out, does seem to be related; being based in Cleveland, UK.
The other Knight Software titles they've got tagged on there seem to be by a Steven and David Knight who were from Knight Computer Services of Hall Green. Yumping Yosser is by Mr A. Knight's outfit, though.

Edit2: I noticed that Mad Monk, despite being advertised from December 1981, was still not ready until at least August 1982... Perhaps it never made it out there? Even resulted in a complaint to trading standards https://archive.org/details/home-comput ... 8/page/n3/

In later years, there are an awful lot of (expensive?) half-page Popular Computing Weekly adverts for Sprite Magic for the Dragon32... under the Merlin and, later, Knight labels... Perhaps backing that particular horse eventually resulted in Mr Knight giving up on software development. Knight Software seems to have disappeared by October 1985, https://archive.org/details/dragon-user ... 0/page/n3/

Return to “other vintage hardware, software and languages”