fuzzel wrote: ↑
Tue Feb 23, 2021 3:14 pm
It's a long, long, long shot but perhaps someone (me even) could write a nice letter to the address in the ad and maybe, just maybe, the person concerned or a relative still lives there. If not it's very unlikely (but not impossible) that we'd get a forwarding address.

This worked for me on one occassion, finding an address and phone number from the early 80s, working out what the 'current' version of the same number was - and calling them up. Managed to speak to the publisher, but they didn't have anything left at all (I won't reveal who it was for obvious reasons of privacy!).

I did try tracking a number of authors/publishers down maybe 10-15 years ago ... though I've managed to locate a few people, I don't think it resulted in any tapes/discs being located. 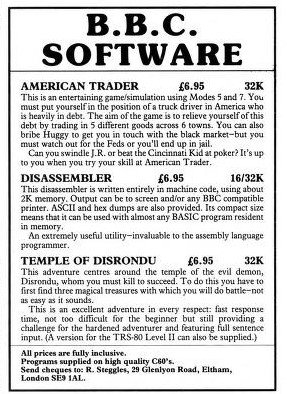 I was able to locate Robert back in '05 ... correspondence below (I don't really think there's any issue in my publishing this?) ... I don't think I followed up again ... I've just tried emailing the address I had for Robert back then but its bounced straight back as invalid. He gave an interview quite recently in 2017 and appears to be involved in The Strand now, so shouldn't be too difficult to locate if anybody else wants to try and get in touch with him? Edit, 8.30pm: Just dropped an email to Strand Games - I'll post back here if I'm able to reach Rob

Interesting about him moving on to Magnetic Scrolls ... I've actually got the Archimedes versions of two of his games (The Pawn and Guild of Thieves) in their boxes on a shelf just opposite me as I type!

I recall that after some serious sleuthing I also managed to locate one of the people behind Dragonsoft who published the late-period "Explorer" game - they thought there was a chance they still had copies but again, I don't think I got replies to my follow-ups...
Please subscribe to the ABug YouTube channel!
Top

Just to follow up I've emailed Strand Games and will post back here if I have any success in contacting Rob.

Edit: 20:45: Had an immediate response back from Strand Games and they've forwarded my message to their last known email addy for Rob.
Please subscribe to the ABug YouTube channel!
Top

Can anyone find an advert for CODEBREAKER or GAMES DISC?

Prior to this, Grange Adventure was sold by R. A. Lober at the same address. Advertised in Acorn User, August 1983 page 108.

iamaran wrote:
Prior to this, Grange Adventure was sold by R. A. Lober at the same address. Advertised in Acorn User, August 1983 page 108.

But you missed this one for The Grange Adventure and Hell's Landing (from Your Computer magazine - May 1983):

Yes.
lurkio had a conversation with him when we found "Pentoms" but I don't think Magic & Mayhem was discussed.
Top

Eastenders by Macsen. There were many adverts for the TV tie-ins. This mention is from Beebug volume 5 issue 8 (Jan/Feb 1987) page 4.

Yes. lurkio had a conversation with him when we found "Pentoms" but I don't think Magic & Mayhem was discussed.

Actually, I don't think I did have a conversation with him at all! Or at least there's no record of my ever having done so. But I've just emailed him now. Thanks.

This is Ranjan Bhattacharya. The Doctor Who game was published as a type-in in Acorn Programs magazine, issue 5 (August/September 1984) page 44.
Top

Paranormal by Riverdale. Reviewed in The Micro User, October 1986 page 47.

Are we allowing "should be available soon" as evidence of a game being released?
I think a minimum should be an advert with a price

CRESVILLION from C.M.G. GAMES: Acorn User December 1984
This is a computer moderated board game.