Nothing seems to be straight forward this week!

I have no idea what happened to the SCART cable I used to have on my Acorn kit so seeing as my Cub is looking like it's going to die soon I thought it was time to make a new cable. Besides, soldering wires to the composite output every time I need to get a picture on the workbench cannot be good

I made up my cable in accordance to a picture from Mark @ Retroclinic which basically has 200 Ohm resistors on R, G, B, Sync and Blank (pin 16). I did not connect pin 8 because I don't like the TV auto-switching as wide-screen does my head in and I initially common'd up all the GNDs for the above signals and connected them to pin 17 on the SCART end and 0v on the beeb end. So far so good right? I even put the resistors into the round din plug and heat shrined it all nice.

Here's what it looks like on an old, cheap Goodmans "HD Ready" thing (lovely picture):

Here's what it's like on the LG TV that I usually use (barely visible):

I've measured the 5V going to the blank signal and there is virtually no drop from one side of the resistor to the other. 5v in, 5v out to all intents and purposes. That's not what I was expecting and will mean the blank is above the spec of 3v, so I can understand the TV being unhappy. RGB signals seem to be the same - scope is saying an average VMax of around 4.4v. But why? The resistors appear to be fine.

On the blank I also tried a 470 Ohm value thinking maybe the TV doesn't have the usual (?) 75Ohm termination but it made no difference.

Finally, not sure if having all the grounds common was a good idea I went back to a single ground on pin 17 (SCART) as per Mark's diagram but again, no change.

I am 99% sure I used to use this LG before with this Master and it had a nice picture. I'm mostly trying to work out if there's anything I can do to make a cable that will work on both monitors, plus ensure I'm not driving the Goodmans in such a way that prolonged use will damage it. I've also remembered that I inherited what might be an ideal small LCD by Polaroid that is useless for PC as it has no remote but my be nice for SCART due to the small size.
Last edited by guddler on Fri Oct 12, 2018 12:57 am, edited 1 time in total.
Top

I will let other more experience people answer with the correct answer, but wouldn’t the lack of voltage drop imply it was acting like a voltage divider and there is some large form of resistance on the other side? I.e what would happen if say you went with 1.2k resistor?

Although if 470 ohm made no difference then possibly not, would have expected that to drop to 4v if above was true.
Last edited by Elminster on Fri Oct 12, 2018 8:06 am, edited 2 times in total.
My small collection of Acorn 8bit related books
The Complete Acorn 8bit Hardware Addon List
Top

LG TVs (and a lot of other LCD TVs) default to composite video inputs on their SCART inputs (as is normal). Some TVs have a user manual selection control in the menus or via a remote control button.

However this does not apply to all modern(-ish) TVs. For these, you have to supply the correct voltages to pins 8 AND 16 on the SCART connector.

SCART Control signals
Pin 8
Status & Aspect Ratio up Pin 16
Blanking signal up  / RGB-selection voltage up For pin 16, a suitable resistor can be used to limit the voltage if a higher supply voltage is available, such as +5V, +9V or +12V. The nominal input impedance on this pin is 75 ohms (most TVs). 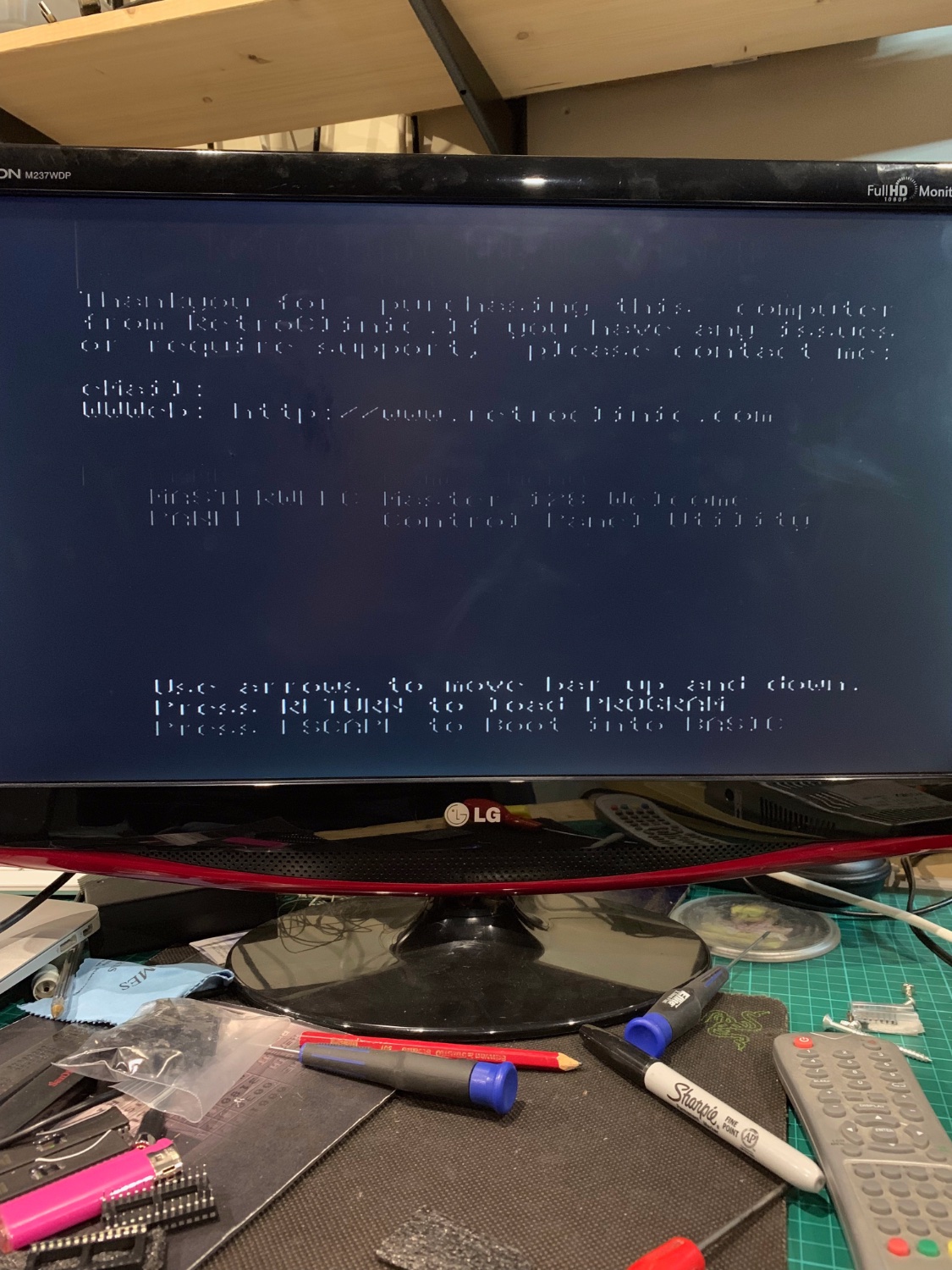 Is typical of a TV in SCART composite mode, but with only a RGB signal being fed to it. The visible white elements are simply crosstalk.

I would not worry about the input voltages from the Beeb not dropping down after the resistors. It may well be the case that the TV does not load all the inputs to 75 ohms unless it is in RGB input mode.

And in any case, it’s highly unlikely that the 5V will do any harm, as (1) the current must be very low if there is no voltage drop across the resistors (and normally at low voltages, it’s current flow that does damage) and (2), the input stages of TV external inputs should have suitable protection, as upto 12V is used on some SCART pins.

All the 0V pins inside the TV are normally connected together anyway. Note that this may not be true for pin 21. But pin 21 should not be used as a signal return anyway.

Thanks for confirming that it looks like it's not switching to RGB.

I'm not really sure what to do here, as always, no solution I have is ideal! Before heading to the office I quickly tried the Polaroid TV/DVD player that I inherited and it again looks pretty damn good, plus as an added Brucy bonus it auto-switches without pin 8 and because I've not hooked up pin 8 (I did try before anyone picks up on that!) it doesn't go into widescreen, so almost ticks all the boxes:

The only real problem with that is the picture and text is quite "blown out". Now I know that's pretty common on LCDs due to scaling but if only I had a remote then I could probably adjust it to the point I was happy. But alas, no remote and all the universal remotes I've tried don't work. I think I can get a Polaroid one on Amazon. More money!

So, just going back to the LG, my suspicion is that it is taking the spec a bit literally and because the signal is > 3v it's not switching to RGB. But how to get that signal down to spec if 200 and 470 resistors didn't help? I'm crap at analogue theory! Just try something considerably bigger as Elminster suggested? Or is that not the way to do it?
Top

I suggest for pin 16, to limit the voltage to between 2.4V and 2.8V, connect four 1N4148 (or equivalent) signal diodes in series between pin 16 (first diode anode connection) and a suitable 0V/GND pin (last diode cathode connection). The original resistor stays connected between the Beeb’s +5V pin and the SCART pin 16. Check the voltage at pin 16. If it is too low (at or below 1V) change the resistor to a 180 ohm value.

I’m not convinced this alone will solve the problem.

So if the diodes don’t sort it, use a 12V DC source (for example, from the Beeb’s auxiliary power connector) and connect it via a suitable resistor (say between 47 ohms and 100 ohms) to pin 8.

So the idea is that each diode drops about 0.65Vs?

If it was taking the spec literally it would have a 75Ω termination though shirley. I'm more inclined to believe the socket is faulty or doesn't support RGB.
A web based teletext editor which can export as Mode 7 screen memory: https://zxnet.co.uk/teletext/editor
Join the Teletext Discord for teletext chat.
Top

You traditionally use what's in your spares box first.

Zener diodes are are ordered on a "per job" basis.

Yes, you could use a 2.7V Zener diode. But how many of us have one spare?

guesser wrote: ↑
Fri Oct 12, 2018 12:05 pm
If it was taking the spec literally it would have a 75Ω termination though shirley. I'm more inclined to believe the socket is faulty or doesn't support RGB.

You raise a good point, I probably need to dig out the manual and make sure I'm using the correct socket. It certainly used to work fine and had a pretty good picture. It used to be on a bracket on the wall with a BBC B underneath it. Before we expend too much effort, let me double and triple check everything.

It's possible I'd have an appropriate Zener, I do have a few other diodes kicking about and I know some will be Zener's but like you say, I'm guessing unlikely to be the correct value.
Top

True. I have recently organised by capacitor and resistor collection. Will have to do my diodes next. But I do know I have some 3v ones.

It is why I buy my scart to RGB cables. Cost of cable is small, my time less so

! NOTE
G Signal type RGB, i.e. the signals red, green and blue can only be selected for the Euro scart and the AV 1 can be
received.

You traditionally use what's in your spares box first.

Zener diodes are are ordered on a "per job" basis.

My point exactly. How do you know that gubbler is not a secret zener hoarder.

I myself only have 92 Zener diodes in stock, unfortunately they range from 3v to 36V, no 2.7V. But maybe i am the exception to the norm then.

I have a few more LEDs though, not counted them all but over 2000 in various colours and sizes. (I got a load of job lot stuff)
Last edited by Elminster on Fri Oct 12, 2018 3:50 pm, edited 2 times in total.
My small collection of Acorn 8bit related books
The Complete Acorn 8bit Hardware Addon List
Top

most of my stuff is digital. I’ve got plenty of tubes of ICs. Apart from that it’s going to be everything you could possibly want to fix Atari black and white vector games (probably)
Top

Well what do you know. I was indeed using the wrong socket. In my defence I WAS originally but the picture was snowy hence why I moved to the other one.

After reading just a few posts my thoughts were the same as sbadger posted above. If your TV has multiple scart sockets you might find they are colour coded (I've seen blue and black on some sets) - only one will support RGB and the other(s) will be composite only.
Top
Post Reply
18 posts • Page 1 of 1