It'll soon be time for the next all day meeting so please respond in this thread if you are interested in attending. 9am - 10pm is the running time and we are aiming to cap the event at 50 people.
The all day events tend to be a bit more structured but there are still opportunities for general discussion amongst the attendees so if there is something you'd like to talk about let me know and I'll make sure everyone knows about it. 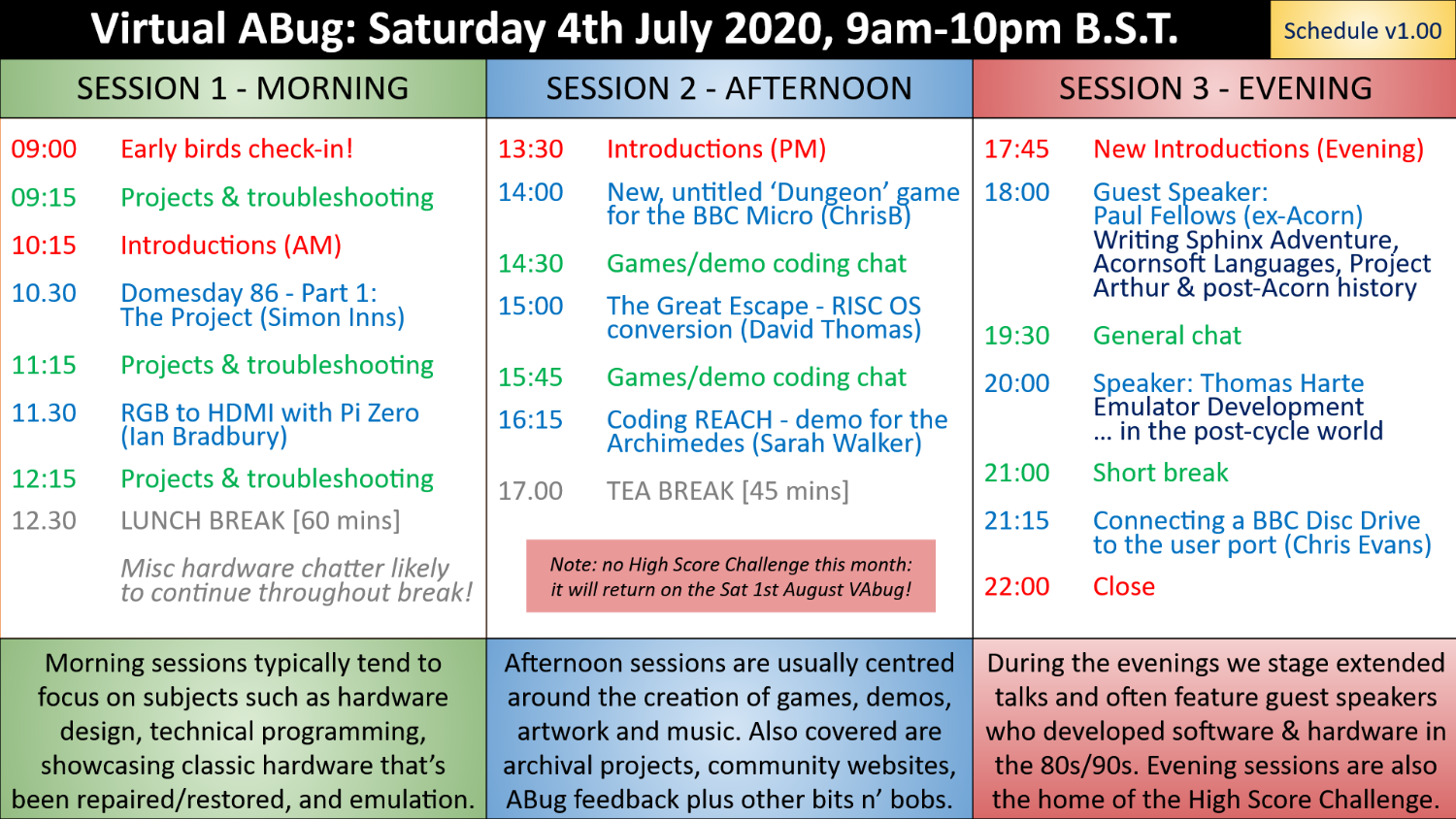 The story of my work with Acornsoft and Sphinx and everything else I did has an interesting thread to it. I became interested in computers and then soon in text-parsers which of course Sphinx emerged from work on the processing of textual input. I wrote that while at university as was the case for my next project which was a pascal compiler for the Beeb which Acornsoft also bought from me... bits of Sphinx carried over into it ... likewise I wrote Acornsoft database around a pattern matching algorithm from Sphinx...

Acornsoft hired me ex-university and immediately put me in charge of computer languages. Most of those went into roms. And languages got broadened to include the terminal emulator and basic editor which were “utilities” not just languages.

I read in the BBC user guide that some VDU commands were “reserved for the graphics extension rom” ... and on investigation I found that not such thing existed in Acorn other than a few loose ideas. So decided we would develop it and pulled the people together who had ideas and made it happen. It was adopted into the BBC Master OS and released for that and simultaneously as a rom to add the capabilities to the B and B+ machines. Having done so that put me and my team on the radar of management and when they found the need for “Arthur” to be developed, they came knocking.

There was also BAS64, a version of BASIC which ran on the B+128 and Master that I dreamt up which inverted the memory map and allowed sideways RAM to support BASIC programs up to a full 64k in size. That too was something that got us noticed

I [will also cover] my post RISC OS activities which are not widely known. In particular Jonathan Griffith (Snapper, Rocket Raid etc) and I re-built an embedded Operating systems that is the son-of-RiscOS which we used in the set top boxes that my company called Amino produced and sold world wide (around five million units) making it more widely sold than the beebOS which was its great grandfather.

And then later in another company we did it again creating a fourth incarnation for a range of zigbee sensors for home security and energy monitoring - and these ended up being deployed by British Gas - most famously in the home energy displays that they sent out to over a million customers... so again the great-grandson of the Beeb OS lives on.

I be thar!
Top

Me please!
0xC0DE
"I program my home computer / Beam myself into the future"

I'll be around as usual.
- Nigel

Count me in please.
A bit more about my beeb life.
Top

I'll be there, doing my bit all about The Great Escape.

I'll be there, likely from 1pm ish until chucking out time

I'll be there. But I will probably be dropping in and out as there is working going on on the house that I am involved in.
There is so much wonder in the universe; why should you want to imagine that there is more?
Top

I'll be there!
Top

List complete to here. Let me know if I missed you!
Top 100 games list as voted by you!
Top

I'd like to be there, lurking throughout the day!

I would like to be there but unsure how much of the day I could make due to having the kids while other half at work!
I could do the morning until about 12:00 - 13:00
Top

Could I have an invite please. Should be around for most of it but possibly popping in and out.
Will definitely be around for the High Score Challenge

Add me as well please.
Top

can you add me as well,
thanks, Mark
Top

Please can you ad me to attendees

List updated to here. Let me know if I missed you.
Top 100 games list as voted by you!
Top

Count me in please

So many projects, so little time...
Top

There is a schedule for July 4th and from what I can see it's looking pretty full though I'm not the man to ask, Arcadian deals with most of the scheduling. I'll prod him and ask for a definitive answer and let you know for sure as soon as I can.
Top 100 games list as voted by you!
Top
Post Reply
71 posts

Return to “past all-day virtual ABugs”