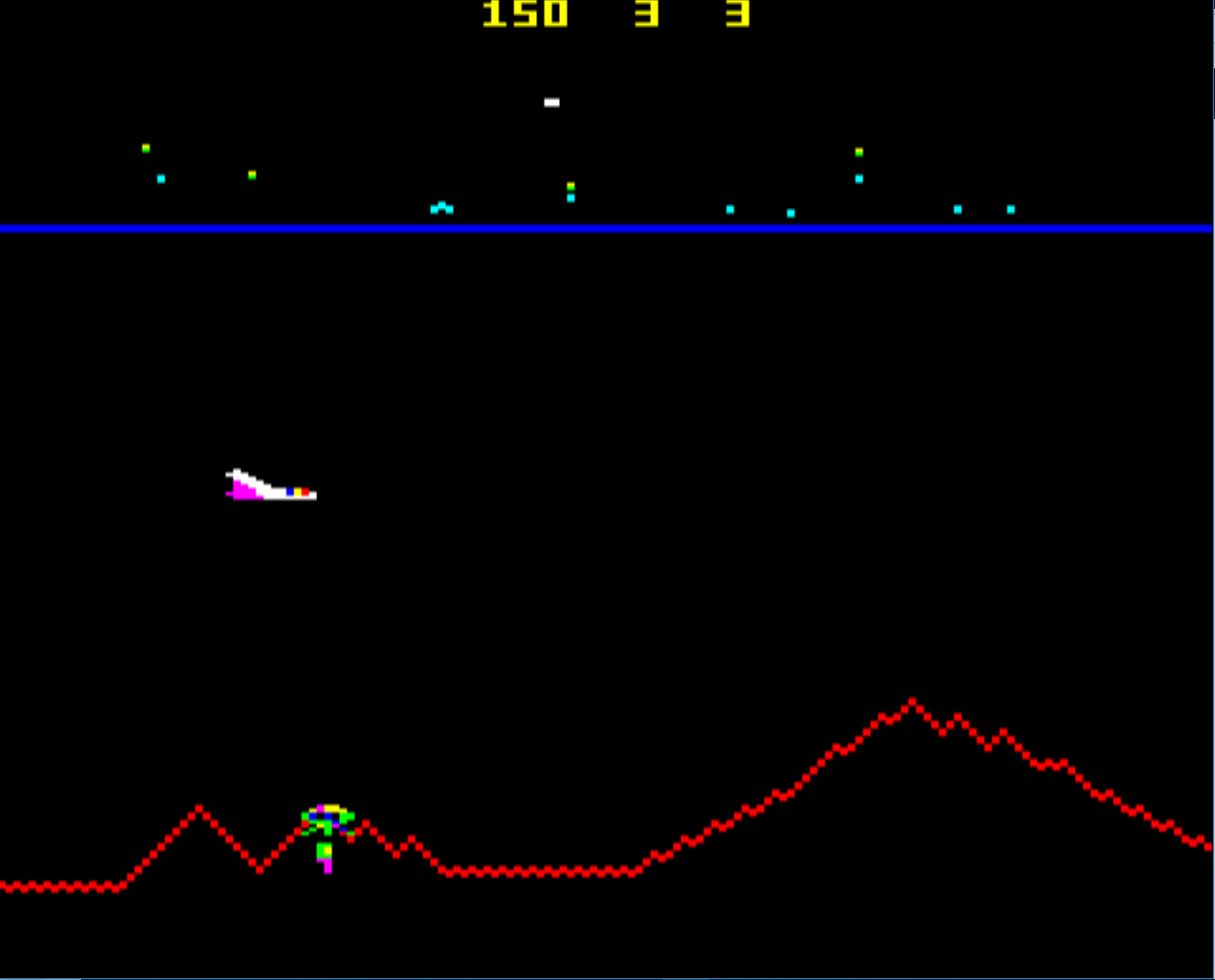 The aim is to score as many points as possible 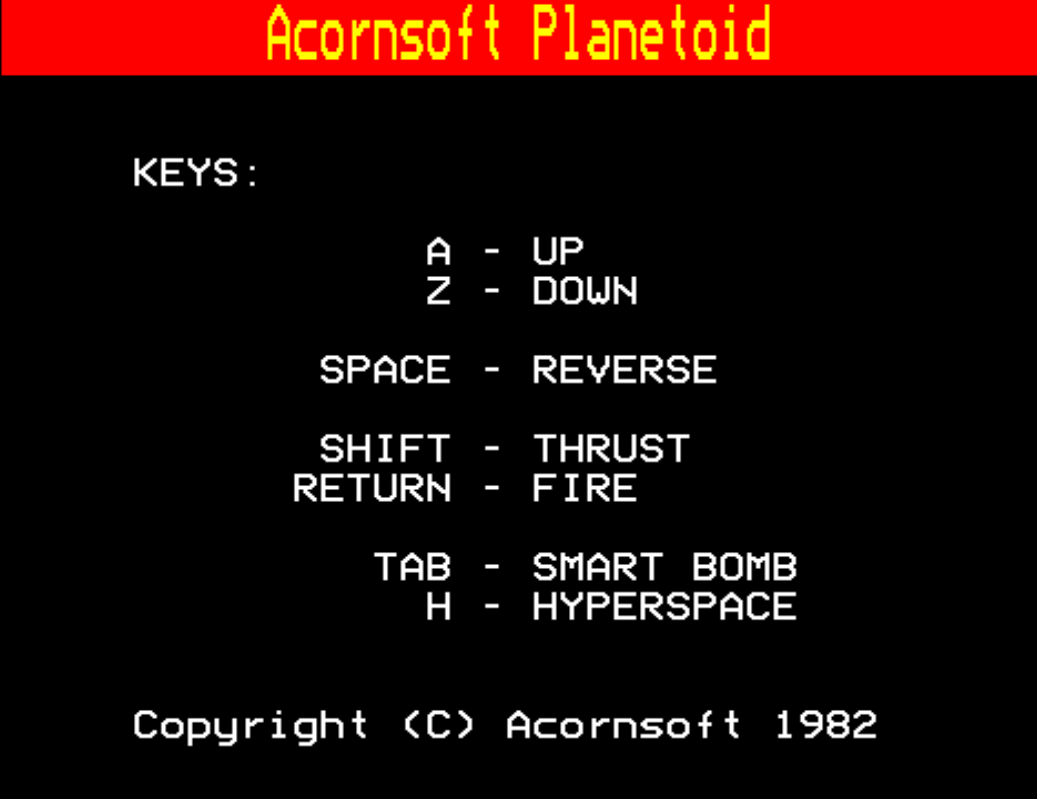 Points will be awarded using the following formula. 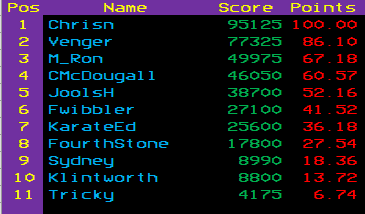 Thanks to Galax for the Mode 7 fonts.

Oh boy, this one I was never good at, will probably bring my score right down for this round.

My only tip, after shooting an alien holding a human, catch the human and take him back to ground for a better bonus.

Yeh, I'm not a fan of this one either, could never get along with it well but......that's what came out of the bowl.

I had a couple of goes before my arm started killing me due to the awkward choice of keys though.

I don't think I'm going to get much better than this; the game gets absolutely crazy very quickly!

ok version this, but prefer the elk version of Gauntlet

Been playing this each day so far and this is the best score I've managed so far.
I suspect this will not be one of my favourite games...

Wonder if Wouter Scholten knows we're playing, he has previously posted amazing scores for Defender in the past...

Not getting the hang of this one

Separate keys for left thrust / right thrust could be an improvement

I seem to be good at all the aspects of this game, just not the right combination. 4175
I can dodge - the falling humans.
I can collect - the enemy shots.
I can stop the humans from getting to the top - by shooting them.
The keyboard mapping makes sense compared to the arcade control panel, but doesn't play anything like the same.
Would it be cheating to wire up my actual Defender control panel and use that!

A bit more about my beeb life.
Top

Now that I would love to see!

If it was possible BITD then go for it I say

P.S. Love your good at but not quite good at game summary

I had a few more goes tonight but this game is seriously annoying. The difficulty curve is ridiculous due to the speed of the landers abducting the humanoids. Before you know it there are mutants all over the place

FourthStone wrote: ↑
Wed May 29, 2019 7:18 pm
Wonder if Wouter Scholten knows we're playing, he has previously posted amazing scores for Defender in the past...

Just noticed it now. My BBCs are in storage, due to other stuff I'm doing (no space at the moment at home), so I will likely not have a go in time... I've not done anything with my BBCs since early 2018 (Skirmish S8R10). At that time I was getting quite a few 900k+ scores with Planetoid that felt easy. Sure, I could get a high score here, but what's the point? I mean, to show off? (I've already done that in the Planetoid thread

) I would suggest everyone to read my posts in the Planetoid thread on how to play the game. Not just to get a high score, but when you get good at Planetoid, it becomes an adrenaline rush trying to survive the mutants etc. Speed gets insane at ca. 500k for bullets, then back to slow, most aliens move ever faster (not so for the baiters, these also have a wrap around), when you reach 400k+ you will already feel a rush, and not sure if it was at such scores, or higher scores, but you will also get a real adrenaline effect. You then need to steady yourself in time, or you will get shaking hands from the adrenaline and lose lots of lives!

To get high scores:

First try this: Watch the radar only, then see if an alien gets a human, go to that man, flying while looking mostly on the radar, then look at just the screen only when you are close.

Then you further need to know: It is essential in this game to know the right flying patterns, i.e. responses, so how to reverse while sweeping down or up with braking so bullets won't catch you etc. This is why I was able to score on radar-only (rest of the screen covered with cardboard) 445k. I had deleted the video of my 767k game on youtube, I may reupload it though it's a bit poor quality (I later found out on the S5 recordings get a lot better with the 'smooth' setting). Perhaps I could make a new video, but, likely not next week.
Last edited by Wouter Scholten on Thu May 30, 2019 11:29 pm, edited 2 times in total.
Top

The old tricks are coming back to me as the permafrost of my mind slowly melts!

A big improvement... nowhere near Wouter's level, but getting better! 95,125

I never was all that good at Defender, this is a pretty good port though.

Well, broke 20k which isn't saying much.....probably won't do much better than this except by accident.

Slight improvement on my score but I don't think I'll get much more than this.

Broke 30k, got to level 4 I think. Enjoying this, although it's brutally hard.

The hyperspace button isn't particularly practical, it's nowhere near the other keys and requires moving your hand to hit?