As mentioned by Jessica Rowbottom on the bbc-micro list just now:

a pal of mine is prototyping a MIDI interface which pretends to be a Music 4000, enabling the Acorn/Hybrid Music 5000 to be played from a MIDI source such as a sequencer 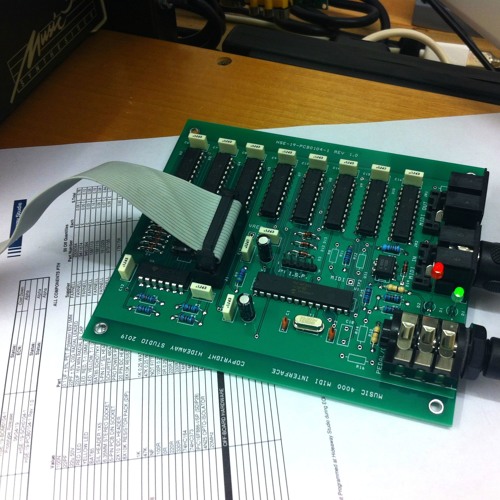 It works!!!! The prototype MIDI interface for the Music 5000 system bursts into life playing an excerpt from Mozart's Piano Sonata No.1

The interface is connected and powered by the User Port on the BBC Micro.

This just may be the first time a Music 5000 synthesizer has been played via midi as the system never offered a midi input facility!...

Edit: should mention Hideaway Studio as the people behind the project.
Last edited by BigEd on Wed Apr 10, 2019 11:46 am, edited 1 time in total.
Top

That looks really interesting. I've been working on transcribing the Music5000 circuit into Kicad with the aim of making one for my new Beeb. I'll start a new thread about it.

I keep meaning to try out the patch I found in the Ample User group newsletter that is supposed to give input from the Music 2000 MIDI interface.
Top

So interesting! It's looking more like Music 5000 and midi might be re-created again with modern hardware in mind

Yes indeed, my cover is blown

I have to say I have been really quite surprised how well my prototype Music 5000 MIDI interface is working for a number of reasons...

This is really testament to the Music 5000, its software and the Beeb's ability to handle I/O in a timely manner. I deal with a lot of vintage kit for a living and its a constant reminder that when you strip a huge modern operating system away and run right on the metal its remarkable just what you can do in a few Kbytes running at a few MHz! Its no wonder really that the BBC Micro was found in so many science labs and research facilities controlling all manner of often ludicrously expensive/esoteric apparatus.

(as an aside, my late father, a research scientist in the field of High Temperature Superconductivity, had three labs dotted with BBC Micros controlling a whole host of sensitive experiments surrounded by steaming liquid helium and a plethora of lock-in amplifiers and probes for many years after the old Beeb vanished from our schools and homes!)

For the same reasons its no wonder that the Vince Clarke was such a fan of the UMI-2B Sequencer for the Beeb as its midi timing was rock solid!

The box itself simply plugs into the User Port - there is no configuration required other than you need to use a disk image of the Music 5000 software suite that has the M4000 keyboard module enabled (most on the net have this commented out on boot up). Naturally, if you already have a Music 4000 keyboard then it should just work out of the box.

The prototype interface has been performing flawlessly - I have a few more robustness checks to do on the midi protocol front but the hardware went together with zero modification to the pcb. This means I will most definitely be in a position to build further interfaces should anyone be interested (my own clients are now desperate for them!).

Here is another quick test recording I made yesterday to prove to myself that the Music 5000 will work ok in an overdubbed recording in Cubase. All of the tracks were recorded directly from the Music 5000 and no time alignment was required.

I have found a fairly smart black enclosure to house the pcbs - the first unit is now housed and it looks pretty smart.

As well as building completed tested/programmed units, for those who are good with a soldering ironf I am toying with the idea of supply the bare pcb, a programmed MCU and at least one slightly harder to source IC. Everything else is available from Farnell.

If anyone is interested in being an early adopter then feel free to PM me.

And for those you want to hear more Music 5000 in action - I have made a playlist of various recordings I have made recently:

I installed my Model B, Music 5000 and the prototype MUSIC 5000 MIDI input interface in the studio this weekend and its been working beautifully!

Rather frighteningly though - almost all of the 96 audio input and 96 output channels in my automated patchbay are occupied!!

I am now sufficiently confident in the design to start accepting early adopters.

Please note that 5 out of the 10 interfaces have already been snapped up - if there is enough interest then I will have a larger batch of pcbs made.

I am happy to provide a working disk image solution and AMPLE ROMs (to allow older Music 500 music files to be played) for those wishing to put together their own MIDI controlled Music 5000 solution booted from a GOTEK or HxC virtual floppy.

The interface itself is on a high quality double sided pcb with sold resist and plate-thrus. They are being housed in a black plastic desktop enclosure that sits nicely on top of the Music 500/5000 box.

If anyone is interested in having their own interface box please PM me.
Last edited by BrokenARM on Mon Apr 15, 2019 1:35 pm, edited 2 times in total.
H.I.D.E.A.W.A.Y S.T.U.D.I.O
www.hideawaystudio.net
www.soundcloud.com/hideaway-studio
www.kontakthub.com/label/Hideaway-Studios/
Top

Just a quick update to this project...

I have built up 5 more of my Music 5000 MIDI Input Interfaces (M5KMIDI) and they go together and work beautifully.

Being able to control and overdub the Music 5000 from an external midi sequencer such as Cubase really puts it in a whole new light!

Although the first units are now almost completely reserved I am now happy to order a much larger batch of pcbs in the near future.

I have been thinking and I will probably be happy to provide the boards not only built/programmed/tested but also in some form of kit in due course (either as a kit of parts or a pcb with a pre-programmed MCU and a bill of materials).

At the moment I am making the M5KMIDI available as either a fully functional pcb assembly or housed in a plastic enclosure.

The latest test recordings are here:

Wow, this sounds amazing, I have been looking for a way to get Midi into my Hybrid Music system for ages, I have a 2000 but have never managed to track down a hack to get the input working.

I have (somewhere) a collection of MIDI files. No idea which external drive/backup CD they're on, but shouldn't be too difficult to locate if you're interested in them. No idea what format they are in as they're from mixed sources.

These recordings you've made are very good.

Assuming you've something that can play a midi file and has midi output, you can feed a midi file directly into one of them (from a PC or somesuch), but the M500(0) will only see one voice.You can, of course, layer it up

Just to let everyone know that the first batch of 10 M5KMIDI boards are now with happy new owners and, having had a number of new enquiries for these units of late, I will probably be ordering a new and larger batch of pcbs in the near future...

The prototype units have been performing extremely well and so far have been working well with all manner of MIDI sources.

BTW, I have received a number of enquiries from those who are a little more familiar with soldering whether I might consider offering the bare boards or a kit of parts and although I am not really able to put kits together (too time consuming) I may well be tempted to provide bare pcbs pre-fitted with a programmed MCU in due course. This really depends on future demand for such an option. If anyone is interested in such, please let me know.

I am particularly excited about two MIDI'd Music 5000 systems I recently installed in famous EM artist's studios as they prove to have an interesting new life. During testing in the studio it was very quickly noted by one excited new owner that the Music 5000 most definitely has a sonic character all of it own.

Despite having some extremely sought after/collectible gear in our studios we all share a love of unusual/quirky/characterful kit which might surprise some as much of it is very inexpensive - this includes very lo-fi samplers, SID based instruments such as the TherapSID and the Music 5000....

In a day where we are all spoilt by squeeky clean digital workstations we become ever more hungry for anything that can bend/warp/colour/dirty/excite sound... and virtual plug-ins can be cool but nothing beats a real piece of hardware in the loop!...

So you never know - Music 5000 may be immortalised on a major new album or a new TV series in the future....

Great news - for me, given the choice between any three-voice synth chip and Music 5000, there's no contest. (Of course they are different animals.)
Top

Just to let anyone interested know that there is still one Music 5000 MIDI Interface board left in the current batch.

Some of the enclosed M5KMIDI units... the socket allows a sustain pedal to be plugged in directly - or alternatively
it is received over MIDI: