Hence when NMOS chips replaced the bipolar transistor logic chips, the NMOS chips were designed to be compatible with TTL logic levels. Later on, as CMOS memory chips were designed, again a lot of these were designed to interface to microprocessors. So it was logical for CMOS microprocessors and other support chips to again be designed to be compatible with TTL logic levels when operated on a 5V supply. Note however that the CMOS chips output drivers (output pins) can drive the output much closer to the +5V supply compared to the figure shown in the diagram below. Also the input switching levels may not be exactly the same as in the diagram below. Always refer to the relevant datasheet for the chips you are using.

1024MAK wrote: ↑
Thu Nov 08, 2018 11:23 am
So it was logical for CMOS microprocessors and other support chips to again be designed to be compatible with TTL logic levels when operated on a 5V supply.

I often end up finding this diagram: 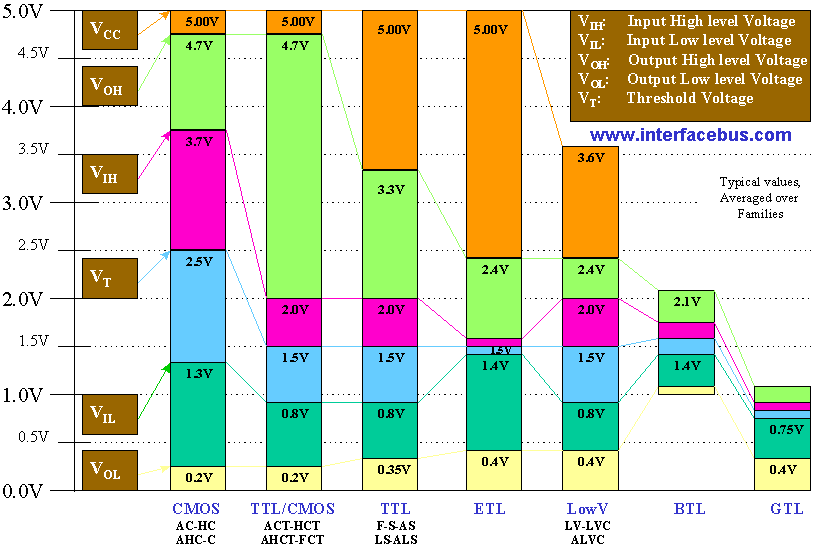 Yes, I often find that useful, although it misses the fact the SOME low voltage systems are 5v tolerant on input.

For example, I'm curently using some 3v LVC buffers and sticking 5v into them which is OK according to the device's datasheet.
Top

And there's LVTTL levels which will drive 5v TTL parts but not CMOS... that's got me a few times. The 65816 and 65c02 chips need strong CMOS levels on their clock pins or they misbehave. I spent months debugging a problem on my first 65816 project that appeared to be a timing problem but was cured by strengthening the clock signals
Top

dominicbeesley wrote: ↑
Wed Nov 14, 2018 10:04 am
And there's LVTTL levels which will drive 5v TTL parts but not CMOS... that's got me a few times. The 65816 and 65c02 chips need strong CMOS levels on their clock pins or they misbehave. I spent months debugging a problem on my first 65816 project that appeared to be a timing problem but was cured by strengthening the clock signals

I know, its just another thing that needs to go on the list of gotchas with logic levels, along with the "compatible" LVCMOS and LVTTL levels popular on some FPGAs. On the 65* NMOS processors it is fall time rather than rise time that's the killer, the original 6502 could tolerate (and generated) slow to rise clocks. The 65816 and 65c02 are very picky though and seem to (un)happily clock away on noise on a rising edge whilst ignoring any signals that don't go reliably and quickly to over 3.5V then seemingly work fine on out of spec signals for days. I have to admit having originally mis-read the spec for the w65c02 which has two sets of figures in the same row for two different sets of signals.

[on the 65c02 chips it's not just the clocks but also RES, IRQ, NMI, SO on the 65816 its everything though it seems to accept lower than spec levels for the D lines...for quick and dirty work I've found that the z80 will work ok with a lowish (1k) pull up resistor on its clock inputs when I've wanted a lash-up and only had a TTL buffer for the clock]

Here's a diagram that I have on call from EEtimes (https://www.eetimes.com/document.asp?doc_id=1231111) it shows the LV levels too which can be handy when working with new fangled stuff

Always found this a quick and easy design for a level shifter :
https://learn.sparkfun.com/tutorials/bi ... -guide/all

The topic has drifted quite a lot to clocks so I'll mention that I've been
checking out the clock into a XC9500XL which is 5v tolerant.
Last night I used the Arb to generate clock pulses with various
rise/fall times but all supposedly monotonic (and so that seemed
on the high BW 'scope).
With a rising edge flip-flop it needs faster than 200ns rise and 500ns
fall. Any longer than that and the system starts glitching quite badly.
I suspect the slow clock causes high current draw which then makes
the supply droop and changes the threshold causing multiple triggers.

The system I'm interfacing has a horrible RC circuit on the line
driving the clock as a filter as it's in a harsh RF environment. I'm
going to have to put it through a Schmitt buffer to clean it up.
Top

Any longer than that and the system starts glitching quite badly.

Maybe a little off topic but i'm struggling with a XC9572XL driven by a DIL oscillator but after some time the CPLD freezes.
The oscillator is powered with 5V, the CPLD with 3V3.
Last edited by bprosman on Wed Nov 14, 2018 8:30 pm, edited 1 time in total.
Top

bprosman wrote: ↑
Wed Nov 14, 2018 8:29 pm
Maybe a little off topic but i'm struggling with a XC9572XL driven by a DIL oscillator but after some time the CPLD freezes.
The oscillator is powered with 5V, the CPLD with 3V3.

If the oscillator block is high drive and only driving a light load then
you might find it's ringing and overshooting 5v considerably which
could cause a problem like that. You also need to be very careful
with power sequencing, the XC9500XL MUST be powered before
applying any 5v IO signals or it will nuke itself.
Top

Think I nailed it, put an extra (10uF Tantalium) capacitor on the power line and a 1K resistor in series with the clock signal. Its running now already for more than 15 hours without freezing.

Not quite sure where to post this, but as the application for these chips is most likely level conversion for 3.3V systems, I thought this thread was probably the place.

I used a 74LCX125 to convert 5V signals down to 3.3V for my USB POST box, because it has high impedance when unpowered -- i.e. voltages on the inputs don't parasitically power the chip and drive logic on the other side. This is achieved by removing the clamping diode from every input to VCC. (No idea what it does to protect against transients!)

Anyway, I was surprised to hear that hooking it up backwards to the target, which resulted in effectively powering a 74HCT125 with -5V, and passing -5V into a 74LCX125 input, killed the 74LCX and not the 74HCT.

Some experimentation (confirmed by the equivalent schematics in this hackaday post) showed that 74HCT inputs have 100-200 ohms of resistance, but 74LCX inputs don't.

So that's interesting! If you use a 74LCX buffer in your design and want to handle odd voltages on the inputs, make sure to add a series resistor. In my case I was passing the target's 5V line into a spare 74LCX input so I could detect if the target was powered. I'm going to replace it with a SI8642 isolator, which should do a better job of keeping the host and target side of the system separate!

Note that 74HCT outputs, however, appear to have a diode or two straight to ground; connecting -5V to an output on the 74HCT125 caused my PSU to drop to 1.1V when limited to 0.1A, and 2.2V at 0.5A. I guess this is the MOSFET body diode in the low side driver.

For now I've only tested with a 74HCT125, which has explicit inputs and outputs. I have some 74HCT245s handy, which are bidirectional; I imagine every pin there would behave like the 74HCT125's output pin.
SW/EE from New Zealand, now in Mountain View, CA, making Beeb/Elk/Arc hardware projects for fun.
Most interesting: Arcflash, POST Box, Ultimate Electron Upgrade
Top
Post Reply
13 posts • Page 1 of 1