Hello! I've replaced my Risc PC HD (3.60 with Patch 2) with a 16GB CF card directly onto the mobo interface rather than an IDE podule. All worked well - it initialised with its default setup in Hform but when copying all my HD contents over, everything stops at 550Mb with a Disc Error 20. Aborting, then copying anything else to the drive gives Disc Error 21 and then completely freezes the OS.

8GB SanDisk CF does exactly the same - but at the 530Mb mark. Anyone come across this before? I'm imaging it's either the £4 CF-IDE adapter I bought off eBay (though doesn't explain why it's fine for 500mb!) or SanDisk cards?
Top

It won't be the IDE adaptor - those are pretty much a straight-through device. I've personally had very little joy with getting CF cards to work on the internal IDE interface (it's not quite "standard enough"), and have had more luck with SD adapters (but you can only dangle one of those off the IDE port, so no CD-ROM at the same time). 3rd party IDE podules are rather better behaved with CF!

I say this, but I know some forum members have found CF cards that do work on the internal interface.

Mirroring what Daniel said, I've had little success with CF as well. Of the dozen I've purchased to test, only one worked. An identical make model to the one that worked however produced disk errors, so it's really hit and miss on the onboard IDE.

I'm one of the apparently fortunate people who has had good experiences with CF on the internal IDE; I did end up finding a cheap IDE podule though, so ended up moving it over. The CF card I've got working? Sandisk; I believe a 4GB one from the Extreme IV line. I even had the RiscPC recognising two cards (in a double adaptor) at one point.

I did have some trouble with the wiring (usual IDC breakage); so I ended up plugging one into the podule directly; but a wiring fault tends to be more of a go/no go than anything else. Similarly I've had issues with the CF adaptors; but that also tends to be a go/no go. AIUI, the usual problem for CF on the internal interface is that CF+ cards don't have to support True IDE mode. If it's getting recognised then that's almost certainly not the problem.

Counterfeit cards are a significant problem. (This article claims that 1 in 3 cards marked Sandisk weren't made by Sandisk.) Indeed, fakes have even made their way into legitimate supply chains. One scam involves using manufacturer tools to alter the reported capacity; for example, getting a 512MB card to report itself as somewhat larger.

That last point makes me wonder; have you tested the card in another machine to confirm that you can read/write more than 500-odd MB to the CF card? At least that way we could eliminate the CF card.
Top

Thanks for the heads up! This machine is perhaps the most frustrating thing I've had to deal with!

I don't want to put much more money into it as already replaced the motherboard (could have bought a new one!!), so failing getting a backplane and podules, would you recommend trying SD on the onboard IDE with something like this - http://www.ebay.co.uk/ulk/itm/351131265761 ?

It's more annoying it works partially - all fine for a while after copying lots of stuff and then error after error!
Top

cowboystyle wrote:Thanks for the heads up! This machine is perhaps the most frustrating thing I've had to deal with!

Surely that's all part of the fun

I've also tried numerous CF card in my RiscPC and had no luck. SD card adaptors have been more successful on the RiscPC IDE interface (although the latest batched of these from China are proving problematic on earlier pre-RiscPC Acorn IDE interfaces).


cowboystyle wrote:would you recommend trying SD on the onboard IDE with something like this - http://www.ebay.co.uk/ulk/itm/351131265761 ?

This should be OK on the RiscPC, I have one of these working under RISCOS 3.7. However this type won't work on the Acorn IDE interface used on earlier A5000/A4000/A30x0 hardware.

A couple of useful threads on these topics below:

Also you mention the disc error with your cf card only happens above 512mb. Have you tried formatting the cf card to below this size (eg. 480mb) and seeing if it works fine?

As I recall RISC OS 3.6 was Acorn's first venture above their historic 512mb hard disc limit, and 3.6 was a very short lived OS, being rapidly replaced by 3.7, which supported much larger discs. Perhaps there were other issues supporting discs >512mb with 3.6?
Top

I've sadly not been able to test the CF elsewhere (don't have a card reader!), but now that I have both 8GB and 16GB cards - I might swap out my old HD from the A3010 and put the CF interface in there - have an IDE minipodule it'll go nicely with! Interesting point about the limit; it's odd that it works *absolutely perfectly with no issue* until around the 500mb mark. I'll softload 4.02 temporarily and try re-initialising and filling up the card to see if it's an OS thing. Really want to keep the Acorn logo bottom right though!

cowboystyle wrote:I might swap out my old HD from the A3010 and put the CF interface in there - have an IDE minipodule it'll go nicely with!


cowboystyle wrote:I'll softload 4.02 temporarily and try re-initialising and filling up the card to see if it's an OS thing. Really want to keep the Acorn logo bottom right though!

I understand - I'd like to run an Acorn ROM, but, handful of incompatibilities aside, 4.xx is a much better operating system. Worst case, though, you should be able to replace the sprite for the Switcher with the Acorn logo!
Top

poink wrote:The limit in the A3010 will be 512MB (or 2GB, assuming that your podule supports 4 partitions).

Optimally 499MB and 4GB depending on your podule. The Simtec IDE podules support larger capacities than that to but you can only use 8 partitions at a time. The good bit with the Simtec podules is that you can mount and dismount partitions at will so you can make use of huge amounts of storage without having to reboot and reconfigure all the time. 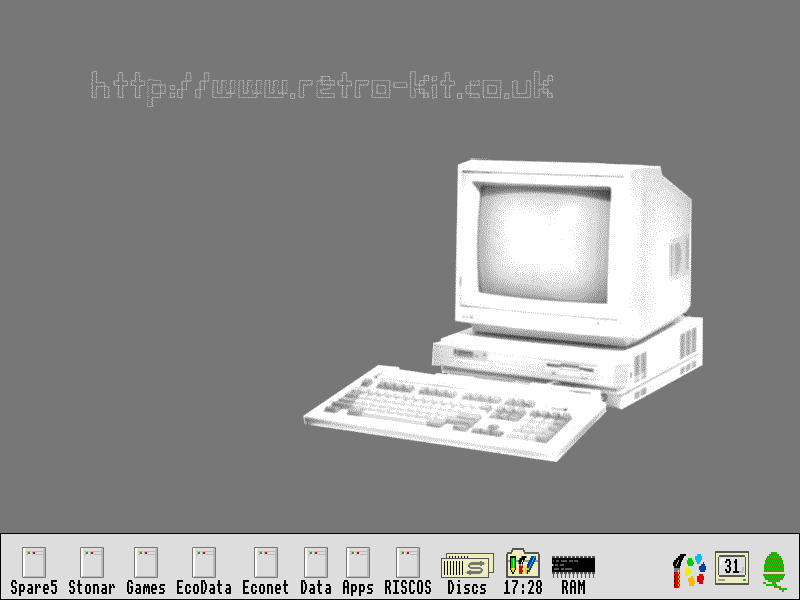 cowboystyle wrote:8GB SanDisk CF does exactly the same - but at the 530Mb mark. Anyone come across this before?

I think it's worth checking with a later OS in case of some issue with RISCOS 3.60 (I'm using 4.02) but I've seen similar problems. I've got six 4GB sandisk CF cards, all nominally identical and only one works reliably with the others failing in similar ways to yours although at a lot less that the 500MB mark. I have about a dozen CF cards in total but only about 3 of them work reliably.

My current solution is to use SD to CF adaptors like these:
http://www.ebay.co.uk/itm/High-Speed-SD ... 1481066452
together with UHS1 micro SD cards like this:
http://www.ebay.co.uk/itm/16GB-SanDisk- ... 1848279920
The speed of the above SD cards is overkill for the RISCPC IDE interface but I have found that using slower SD cards results in brief stalls during lots of file activity like copying due to write amplification in the SD card.

I have managed to get two of these adaptors running simultaneously as master & slave using this sort of CF to IDE adaptor:
http://www.ebay.co.uk/itm/Dual-Compact- ... 1255306632
but I haven't tried using one of them with a CD ROM drive.
Top

Sir, I like the cut of your jib - that's exceptionally good information!

Wow, awesome. I've a project where I need a type 1 SD->CF adapter but have only ever been able to find type 2. I was thinking that type 1 didn't exist. As an interim solution I took the adapter to pieces and it "kind of" fits, but this is SO much better

munchausen wrote: Wow, awesome. I've a project where I need a type 1 SD->CF adapter but have only ever been able to find type 2. I was thinking that type 1 didn't exist. As an interim solution I took the adapter to pieces and it "kind of" fits, but this is SO much better

danielj wrote:Sir, I like the cut of your jib - that's exceptionally good information!

One other thing I just remembered about the use of CF cards.
On one of my RISC PCs the SD to CF adapters work fine but on the other one they stop the network card from working (i-cubed NIC).
This must be a common problem as CJE micros list one network card that is "CF-IDE compatible" : http://www.cjemicros.co.uk/micros/price ... king.shtml

The problem is caused by the "Ready" signal on Pin 27 of the IDE interface which is shared with the network card. It's probably meant to be pulled high weakly and driven low by open drain outputs on the network and IDE interface, however it looks like the adapters and some CF card are driving it high which causes any network card that makes use of that signal to fail.
However, the fix is fairly straightforward and that is to put a diode in the Ready line between the CF cards and the IDE socket on the RISC PC with the cathode of the diode (banded end) towards the CF card.
I used a schottky diode as that had a lower voltage drop but any small signal diode like a 1N4148 should work. I found it easier to cut wire 27 of the IDE cable to fit the diode rather than modify the PCB.
Top
Post Reply
15 posts • Page 1 of 1