As previously mentioned, I used an arduino to replace a broken electronic safe controller and made it computer controlled instead:

The circuit design is pretty simple: 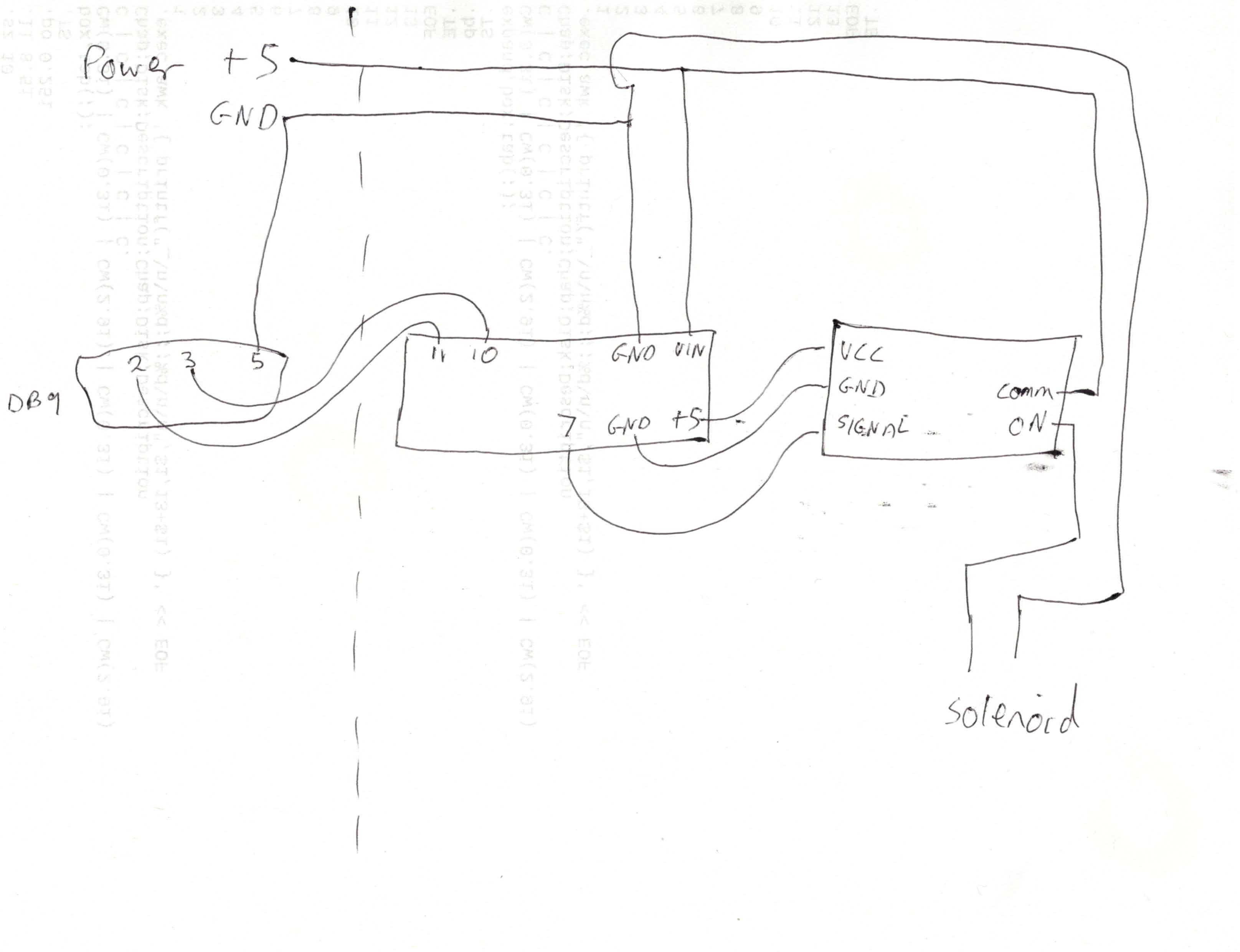 But recently I've been having a problem; whenever I open the safe (click the relay) the Arduino reboots. I have three theories, but I dunno if any of them are reasonable nor how to test it

1: Power adapter I'm using isn't powerful enough to drive the relay, solenoid and arduino so there's a power drop and a reboot. The original just used 4x1.5A batteries; this is using a USB 5V adapter.
2: Solenoid is causing a spike and a capacitor could smooth that out?
3: Solenoid is causing back-voltage and a diode would fix it?

Anyone have any ideas? Needing to dig up the "emergency key" each time I need to open the safe kinda negates the point of all this

Here’s a thread from the arduino forum that addresses a very similar situation to yours - https://forum.arduino.cc/index.php?topic=439787.0
- you need a fly back diode!
Hope that link helps

I'd go for 2 and 3. If you've got a relay nearby, you've got a very electronics-unfriendly environment, and a capacitor or two (one big, one small) helps to keep things peaceful. You might also look at your power wiring: separate wires from the supply to the heavy duty stuff on one hand, and to the delicate electronics on the other, might help.
Top

At the same time as fitting the diodes, also fit 50V or 100V 100nF ceramic capacitors across the coils.

Also instead of daisy chaining your positive 5V and the 0V/GND wiring. Do this:- A spike may find it's way along the control circuit/wire to the Arduino, if you still have problems give us some more details.

Thanks for the replies!

If I understand correctly, then I should put a diode between VCC and GND on the input to the relay side, with the cathode on VCC and the anode on GND. That's easy enough. Similarly another one between ON and GND on the output of the relay.

Should the capacitors be in the same places? In parallel or series with the diodes?

I have a horrible feeling I might need to get my soldering iron out... the horrors!

PS: Thanks, Mark, for the "end with the white stripe" comment; yes, that is the sort of stuff I do need to know

As you can guess, I really don't understand this too well!
Rgds
Stephen
Top

Notice how the diode is connected across the coil and not just across the power rails.


sweh wrote:Should the capacitors be in the same places? In parallel or series with the diodes?

The 100nF capacitor should be in parallel with the diode and the coil.

More info on diodes on this Wikipedia page. It includes a nice picture showing the symbol and images of diodes with the same orientation:-

I now have a weekend project

Looking through my box of randomness, the only diode type I have is 1N914. I've also got a bunch 0.1uF 50V capacitors.

It's funny that two components, so small, can make such a difference

sweh wrote:Looking through my box of randomness, the only diode type I have is 1N914. I've also got a bunch 0.1uF 50V capacitors.

It's funny that two components, so small, can make such a difference

I can't tell what solenoid it is; it's very wrapped up ( https://www.sweharris.org/Safe/large/internals.jpg ). I can find lots of pictures, but I can't find any actual specs. I've seen some for sale on aliexpress claiming to be 6V 0.35A ( https://www.aliexpress.com/item/Solenoi ... 86657.html )

I'm powering the whole thing from a 5V 0.7A supply, which seems to be enough to open it. I wasn't sure it'd work, when I started; it originally was powered by 4*AA batteries.
Rgds
Stephen
Top

Looking at your 1st picture (if that's the same as your system) it looks like there is already a diode across the solenoid on the printed circuit board.
Peter.
Top

The datasheet for 1N914 diodes is here.
The normal maximum forward current is 300mA. They can take larger currents for short durations. In practice though, signal diodes like this don't like the large current that flows when the magnetic field of the inductive device collapses, even though the current flow is only a short duration (see note below).

There is no harm in trying a 1N914 if you wish too. Just make sure that you have a fuse between the PSU and the circuitry. A fuse is strongly recommended, as sometimes diodes go short circuit when they fail. The value of the fuse should be around 5 to 10% greater than the normal maximum current of the circuit, or 5 to 10% greater than the maximum rated current of the PSU. Although in practice the limited range of fuses means you just go for the next available value that is greater than the circuit current/PSU rating. Because you have a solenoid, you should use a time delay fuse, also known as anti-surge fuses.

If the relay is on a prebuilt module, the module may already have a diode across it's coils. For example like in this picture:-

Peter, Stephen is not using the control board that came with the safe.
Stephen, if you still have the old control board, you could remove the diode from it.
But as 1N4001 diodes are so cheap, it's just easier to buy some new ones. If you were nearby, I would give you some. For example, here's some listings on eBay.com.

Note: at work we used to operate a 1960's control system that used many twin coil relays (these are rather larger than the modern small 5V PCB mounting relays). These ran at 18V DC. We tried using modern signal diodes to replace any original failed diodes. But although they worked for a while, we soon started seeing failures. Some of the 'new' diodes had failed. However, keep in mind that some of these relays operated many times a day.

okay so what is the control board then is that just a relay board ?
Like this It's not clear from his write up, some photos would help as the block diagram tells you nothing.
Top

The initial link to my site goes into a bit more detail but, to make it simple, I wanted to replace the original (broken) controller board with an Arduino Nano. That'd let me do more "computer control" of the safe via a serial port.

Because I was pretty sure the Arduino wouldn't be able to supply enough current to make the safe solenoid open (I think the Arduino can supply 40mA max), I made it trigger a relay instead, and the relay controls the +5V to the safe solenoid. From my limited knowledge, I believe this is a standard design pattern.

The relay board is very similar to the one you saw; it has some activity LEDs to show the state and, yes, I had noticed there was a diode on the control side, which I assumed was sufficient (which makes sense; the board was designed for connecting to Arduino/Pi/etc so having the diode already there would be sensible).

So I think I only needed to put stuff over the safe locking solenoid. Which, of course, is the higher powered side of the circuit and so likely to suffer the problems Mark is cautioning me about

If I were wanting to control a solenoid using an arduino, I’d use a MOSFET transistor, or a TIP20 darlington pair, rather than a relay - here’s a nice step by step guide: https://www.bc-robotics.com/tutorials/c ... h-arduino/
Top

The transistor would work as a drop-in replacement for the relay, yeah. It doesn't prevent the need for the diode over the solenoid, though

I would try the diode across the solenoid and capacitors that where suggested, as the relay already has the protection diode.
so either its the back surge from the solenoid causing a problem or overloading of the 5v when the solenoid is activated.
Peter.
Top

sweh wrote:It doesn't prevent the need for the diode over the solenoid, though

I now have so many diodes I can rectify the world. (Hmm, maybe all of them together will rectify that Brexit idiocy?).

Hopefully I'll have time this weekend to try it out.
Rgds
Stephen
Top

sweh wrote: I now have so many diodes I can rectify the world. (Hmm, maybe all of them together will rectify that Brexit idiocy?).

Unfortunately I don't think there's anything that can sort that out short of sending May to a remote part of Siberia.

It costs me money every time she opens her mouth!
I too now have a large number of 4k7 and diodes on my desk for the same reason