Was wondering the othersay if there were ever any enhanced Electron games that took advantage of any of the RAM upgrades available for the Acorn Electron like there were for the Beeb?
Top

Not as far as I know.

I think some companies might have sold BBC adventure games as being suitable for a 64k Electron, but that’s not quite the same thing.
Top

I think some companies might have sold BBC adventure games as being suitable for a 64k Electron, but that’s not quite the same thing.

I concur . . . I can't remember any Electron games taking advantage of extra RAM - Probably due to the: Cost of Plus 1 and then the cost of the extra RAM.

Repton TLR takes advantage of sideways RAM to provide a full screen display. Probably more modern than you're asking for though.
Top

Modern games are fine too.
Its just that I often wonder (pointlessly I know) what a difference it might have made to the Electron (and the Beeb to a certain extent) if Acorn had put an extra 16k of RAM inside it from the start.
Top

The ElkSD64 is extremely useful! The extra RAM is a bonus to me. I use it for my own programs or to load a ROM into.
0xC0DE
"I program my home computer / Beam myself into the future"

The ElkSD-Plus1 needs a RAM chip on it to provide workspace for the SD card software, and since 32K chips are no more expensive than 16K ones I just stuck on 32K and made half of that available for user programs. So the extra ram is free

And I live in hope that new or updated games will start using extra RAM, since I'd guess most Elks with SD card interfaces now have at least 16K of sideways RAM.
Gary
Top

It’s a shame that there were never versions of Elite that made use of SWRAM, like there were for the BBC micro.

I think Electrons were sold near there end with MRB (Master ram board) fitted as standard providing much more memory for programs, but I don’t know if any software specifically written to exploit it. Updated:

A development of the Turbo Board, the Master RAM Board duplicated the Turbo Board functionality and added a further option of running the micro with 32 kB of static shadow RAM in addition to the ordinary 32 kB — giving 64 kB total. Some clever program counter catches meant that the ordinary system ROMs and any software using the OS calls could function without significant modification, making substantially more memory available for BASIC, View, Viewsheet and almost every other business application. By providing extra storage this modification also allowed some games and applications intended for the BBC Micro to function on the Electron despite the lack of a native Mode 7

I also guess there was no official Hardware released from Acorn for SWRAM and therefore the lack of software using it. Plenty of non Acorn hardware which provided it.
Richard B
Acorn Electrons issue 4 and 6, MRB, Plus 1, AP6, AP5, Pegasus 400, BeebSCSI, Gotek, Raspberry Pi, GoSDC MBE.
BBC B+ 64K (128K upgraded) with Duel OS, Raspberry Pi and Gotek.
Top

I have an Electron connected to a Plus 1 with an AP6 board installed (original PRES version). I have two static RAM chips installed. A GoSDC card makes use of one of these for a patched DFS ROM. I use the other one to load ROM images. This could be used by Repton TLR. I have not previously used game software that is able to make use of sideways RAM. What is the mechanism used to ensure that Repton TLR makes use of the sideways RAM on the Electron and hence provide a full screen display?

Apart from extra memory for word processing, a common use of the extra RAM in the Master RAM Board was to be able to run BBC Micro text adventures that would previously have barfed due to lack of MODE 7 and consequently memory.

I don't think any games took explicit advantage of sideways RAM if it was installed (almost no one would have had it).
Top

I have an Electron connected to a Plus 1 with an AP6 board installed (original PRES version). I have two static RAM chips installed. A GoSDC card makes use of one of these for a patched DFS ROM. I use the other one to load ROM images. This could be used by Repton TLR. I have not previously used game software that is able to make use of sideways RAM. What is the mechanism used to ensure that Repton TLR makes use of the sideways RAM on the Electron and hence provide a full screen display?

Flip the disc over. Electron Repton TLR is on a flippy double sided disc, with the standard version on one side and the enhanced SWRAM version on the other.
Top

Ah, I'm not sure that all physical Electron releases contained the standard version on Drive 0 (Sarah I think the first batch of 10 at Wakefield might have done, but duplication/distribution of the remainder were taken over by someone else and I think subsequent versions only contained the standard version). But I'm happy to email out an emulator image of the enhanced sw/ram version to any buyers (and even stick it on a second floppy if they can't write emulator images themselves).

As a) it's impossible to buy more plastic cases now - and I'm very low on remaining cases b) I have plenty of the disc wallets left [that were used for White Light) c) the 10th Anniversary is November this year, I was thinking of re-issuing it as a 'special edition' with the cover artwork reformatted for the Wallets.

Was thinking the Beeb version could contain Paras' original Repton 4 build on a second disc as a bonus extra (complete with animated Repton 4 loader screen, Repton 4 title screens ... and bugs!) and the Elk release could contain the enhanced version on a second disc. If there's room could add the Repton 4 'window' that Paras programmed for the intended Electron version (which is pretty much the only dev work that Paras did on an Electron port back in the day from what I can tell). I was thinking I could also include a CD with extras e.g. Paras' hand-drawn/hand-written cover and manual for the game, which he made when he was 13.

Heh, could even include Cyroid-X (the game which Repton 4 evolved into after Superior passed on it). Cyroid-X was sent to Audiogenic Software and contains Audiogenic references - but wasn't published either. Cyroid-X only has one set of 6 screens designed (even though they're almost identical to the Repton TLR levels, with one exception IIRC) but it might make for an interesting bonus extra!

I actually mocked up some covers up for the front and back way back in May, but most of my spare time since then has been taken up organising the Virtual ABugs, and there are already about 8 releases ahead of Repton in the queue(!) so a November release may be a stretch unless I get a wiggle on with the other games! I'd also need to get the ok from R Hanson (Sarah I'll drop you an email shortly, too).

We never released the game for the Compact either (despite a build being made) and that's been bugging me too - anyway, mockups of the fronts I did below. Credit of course to Dave Jeffery (Kecske Bak) for the wonderful artwork.

The thing I felt sad about is the competition winner never got a certificate. I had designed it before the game was released but sadly it got overlooked. 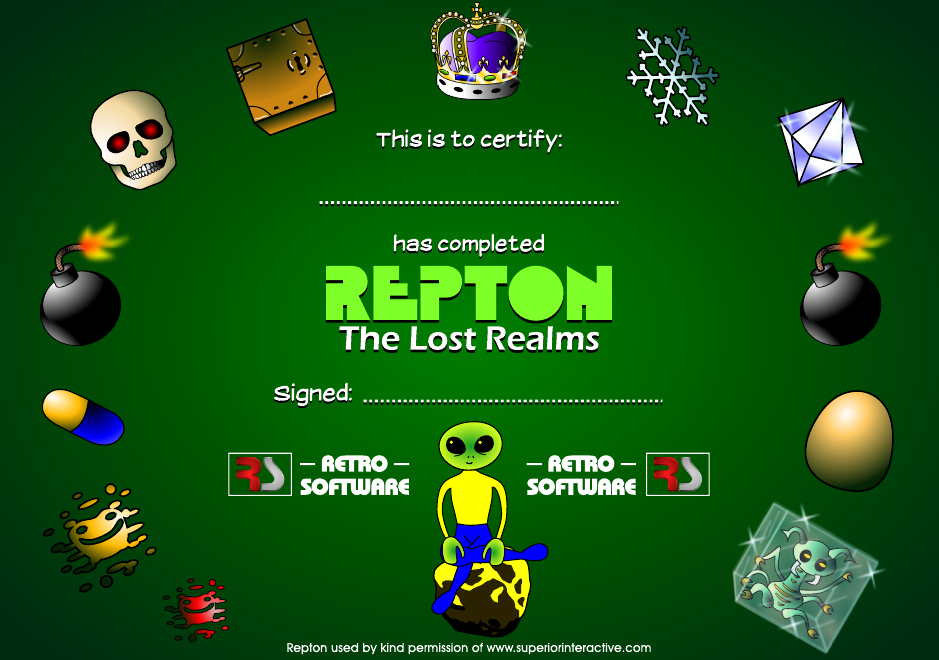